Northern Irish perpetual tourist and travel writer Jonny Blair “whackpacked” the world for the best part of 14 years. The result was a 10 year long online travel blog documenting his journey through 136 countries or regions, his job history picking up random work along the way and his passion for the obscure in Jonny’s upside down world. The title of that blog, “Don’t Stop Living” http://dontstopliving.net was inspired by a High School graffiti slogan sighting in Toronto in 2001. But not everything was captured on its pages. “Backpacking Centurion” completes the picture and delves deep into the culture struck brain of this Ulster child. Along the way Jonny made notes in his personal diary and constructed a book in chronological order to be put on the substitutes bench and “released one day”. The book was finished in 2015 and never saw the light of day as Jonny’s journey continued to Central Asia in late 2015, to the European Championships in France in 2016 to watch his beloved Northern Ireland (Green and White Army). 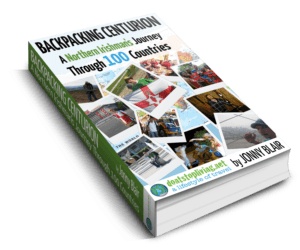 Then, from a Wi-Fi café in the Polish town of Starogard Gdański in July 2016, Jonny finally closed the door on the book. Here in 2017, under a new moniker “Northern Irishman in Poland” the book finally sees the light of day. Expect no cow excrement, no holds barred stories, adventures to “Wacaday countries” in a life of ups and downs. Within the pages, this Bangorian poet dreams of seeing AFC Bournemouth in the Premier League “one day maybe”, cracking the 100 country mark, having a beer in the mountains of Iraq and throwing fireballs in El Salvador. From the ridiculous theft of an exam paper in his hometown to becoming an expert broccoli harvester in Tasmania to naked snow dives in Finland, the journey was everything but mundane. This is no pleasure cruise, no man’s dream, this is a bandwagon worth jumping on and then realising you could fall off at any given point. The self-confessed Northern Irish nationalist nomad still only seeks that one thing in life – the perpetual smile. Perhaps one day, Jonny Blair will find it. In the meantime, he provides you with this book.
Priced £19.82 #arconadaarmstrong
#backpackingcenturion #dontstopliving #northernirishmaninpoland #perpetualtourist 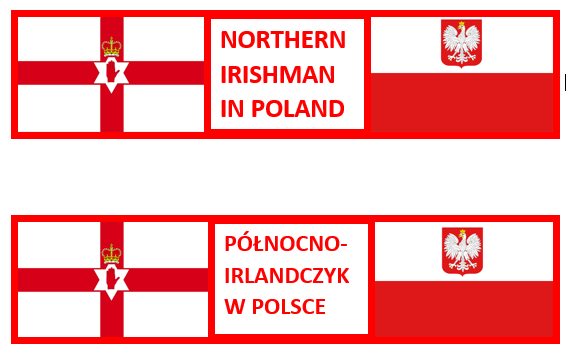 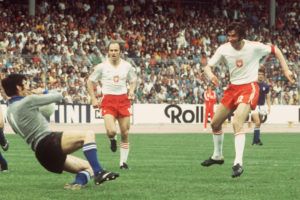 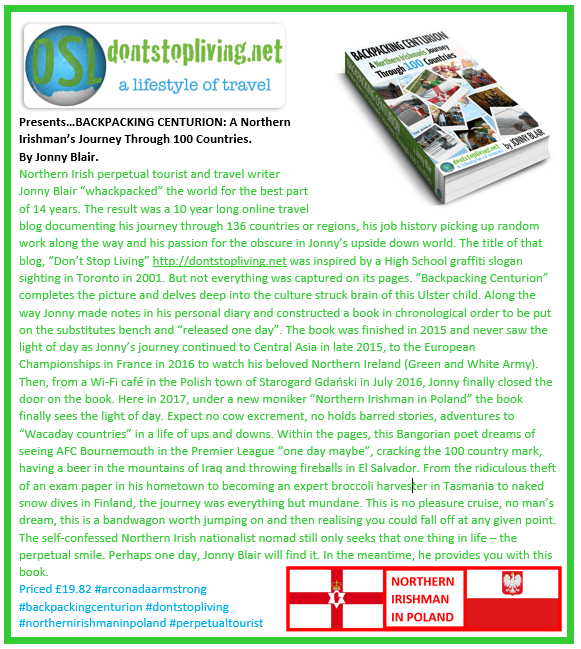 Release date to be confirmed…