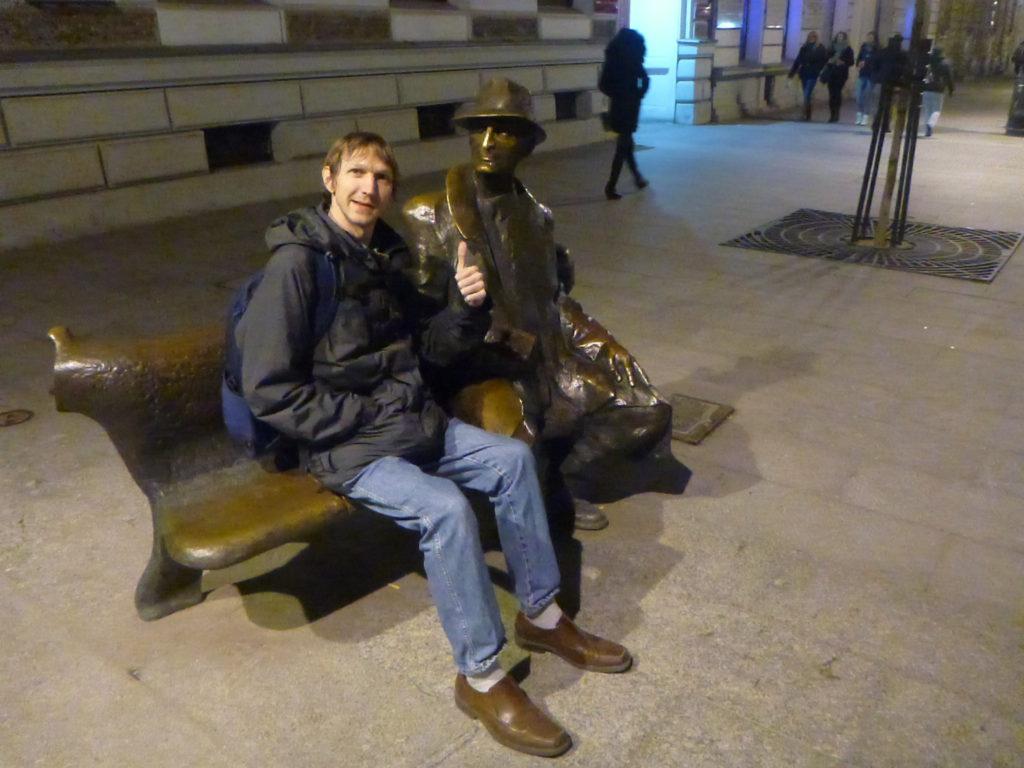 With a length of 4.9 kilometres, Łódź’s Ulica Piotrkowska (Piotrkowska Street) attracts visitors from far and wide. Put simply, it is the longest street in Poland and is often dubbed the longest street in Europe, although other streets debate this. Here is a concise guide to exploring this iconic street which was originally called Bigel by many locals in the past, and is also sometimes referred to as Pietryna. Piotrkowska Street runs longitudinally in a straight line between Liberty Square (Plac Wolności) and Independence Square (Plac Niepodległości).

Your Route Down Piotrkowska Street

Start your journey in Łódź’s old town square, (stary rynek) which is just north of Liberty Square, the northern starting point of Piotrkowska Street. Walk south through the park to Liberty Square and straight in front of you is the beginning of this almost 5 kilometre long street. On the right you will see the Museum of Pharmacy, and on the left sits the Archaeological Museum and the Pentecostal Church. Work your way down through this magnificent thoroughfare, making sure to understand the significance and the history, whilst enjoying some food and drink along the way and exploring the best that Piotrkowska has to offer.

To experience a night here, sleep on the street itself. For those on a budget, there is one hostel located on Piotrkowska Street, the Music Hostel at number 60. However, if you fancy splashing out on an unusual hotel, check out the Stare Kino Cinema Residence Hotel located at number 120 – in here all rooms have a cinema theme to match the city’s popularity as the movie capital of Poland. There are plenty of other sleeping options on the main street. A list of the best hotels in Łódź can be found here. 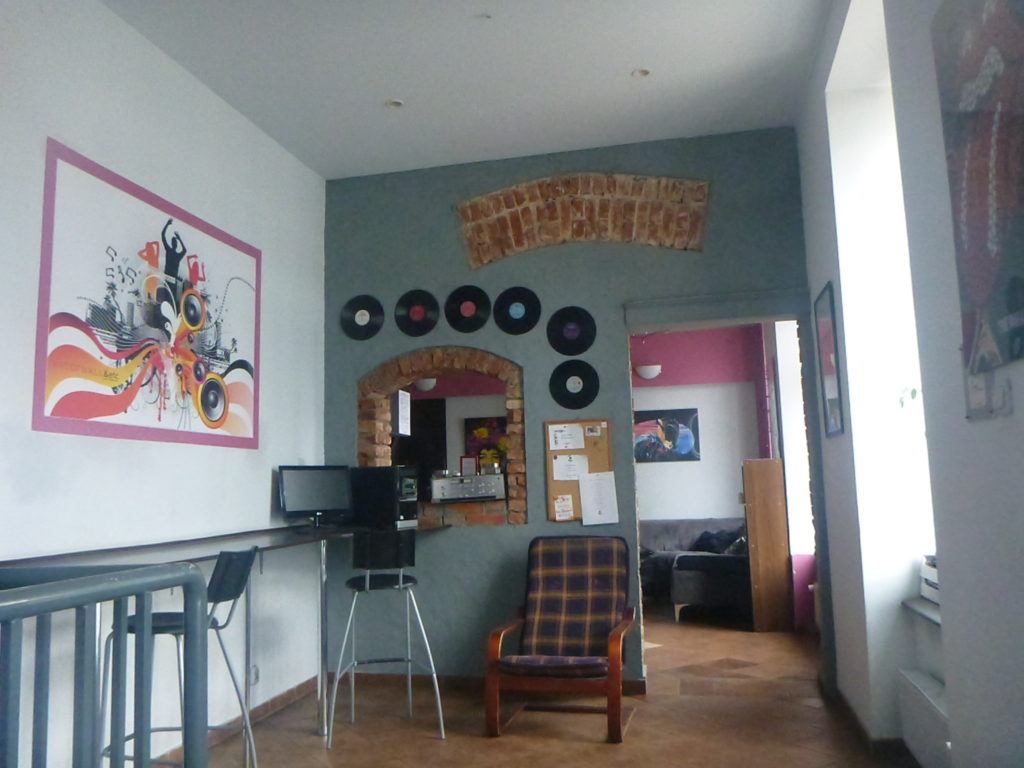 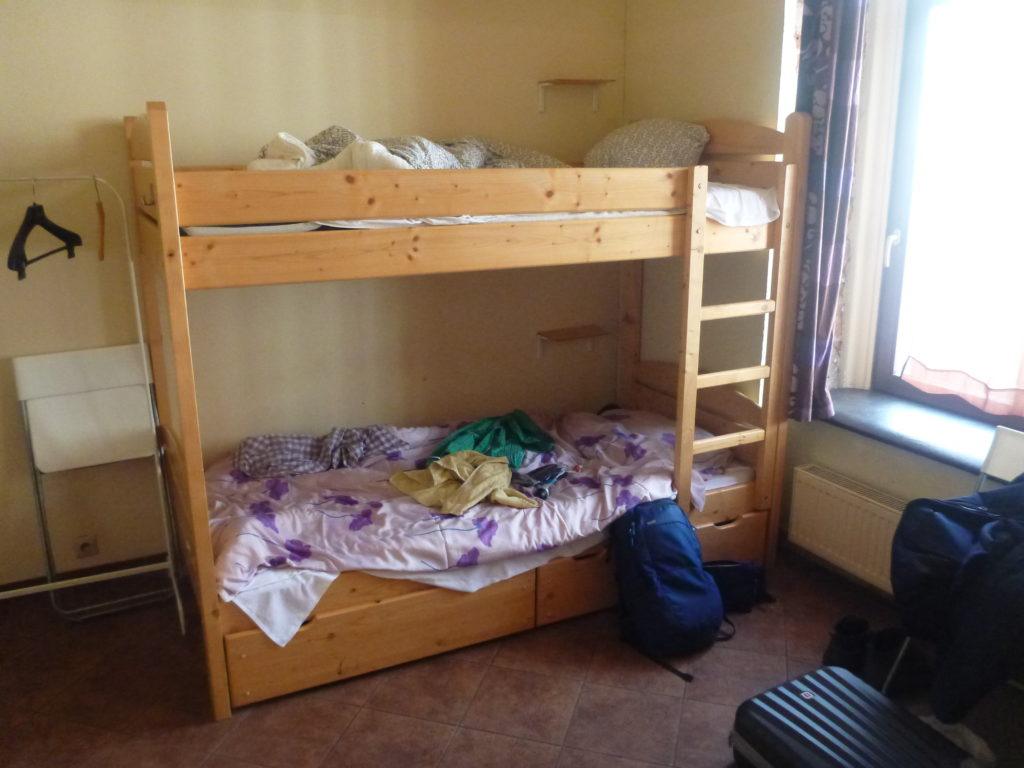 Piotrkowska Street is packed with a blossoming range of up-and-coming cafes. The most stylish cafe here is Grand Coffee (located at number 72), with its elegant old-school interior, it serves a wide range of international coffees and creamy desserts. For cat lovers, head to Herbaciarnia Kocie Oczy (number 25). Here, you can sip some of the finest teas and coffees in Łódź surrounded by the cafe’s resident cats! Also of note, the Hort Cafe (number 106) is a super cosy place to sip a cappuccino and eat one of their trademark ice creams while watching the world go by.

For pub crawl lovers, get ready to explore more bars on one street than you imagined. Start at Bistro (number 71) and work your way down the street, popping into Pijalnia Wodki i Piwa (number 79), Eclipse Inn (hidden in an alleyway at number 80) and Emir’s Magazyn (number 82) to name just a few. Those places also all serve food plus there are plenty more food options on the street including kebab joints and the usual global fast food chains. For further information check out our articles on the best bars in Łódź.

There are over 50 restaurants located on Piotrkowska Street so you are definitely spoilt for choice. For some excellent Polish cuisine, try Karczma u Chochola (number 200) which serves up country style Polish food such as goose pierogi (dumplings) and kiełbasa (white sausage). For a range of international dishes, check out Drukarnia Skład Wina & Chleba (number 138) which is famous for its wine, pasta and curries. For pancake lovers, Manekin (number 65) is a superb Polish pancake chain worth popping into. The entire street is full of restaurants, all the way down and flavours of the world waft through the street at every corner.

Half way down Piotrkowska Street (at numbers 138 – 140) is a poky little bar zone called OFF. Here you can find a load of quirky bars, cafes, restaurants and clubs all with their own individual appeal and packed into a renovated courtyard. Check out Brush Barber shop, which is an intriguing place. By day, in front of mirrors, barbers cut hair. By night, the hairdressing tools and chairs are removed as Brush turns into a lively cocktail boasting its own brand of cocktails. 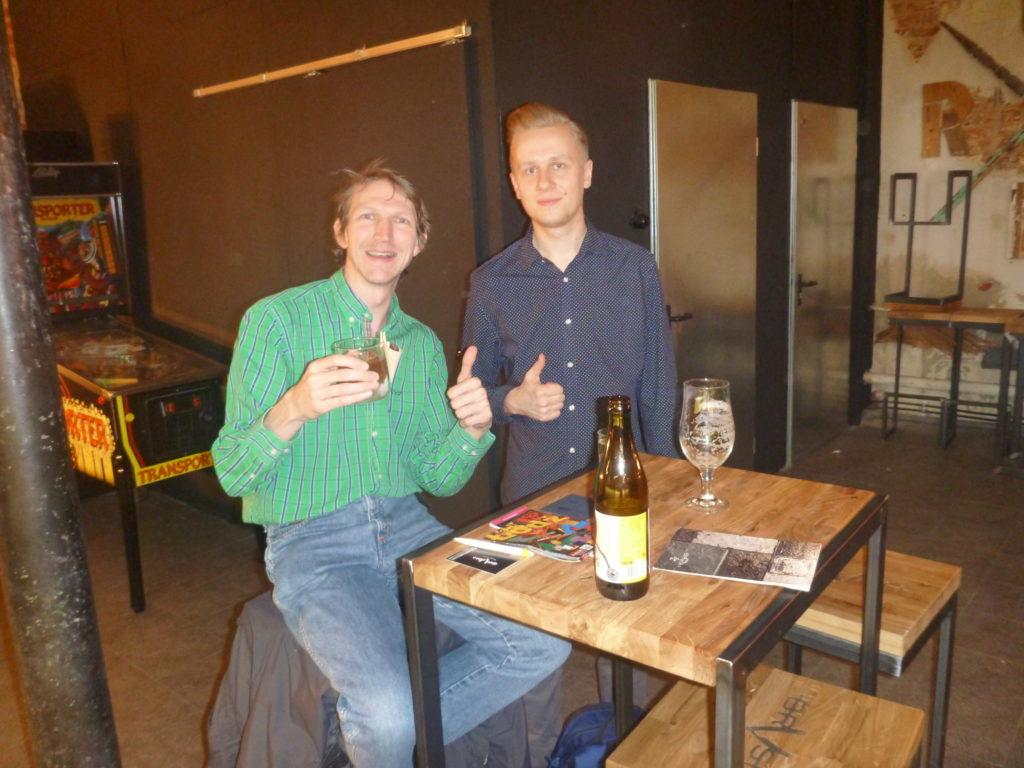 Also in OFF, there’s the Football Bar for sports fans and the trendy Mebloteka Yellow Bar which attracts a good mix of students, locals and tourists. 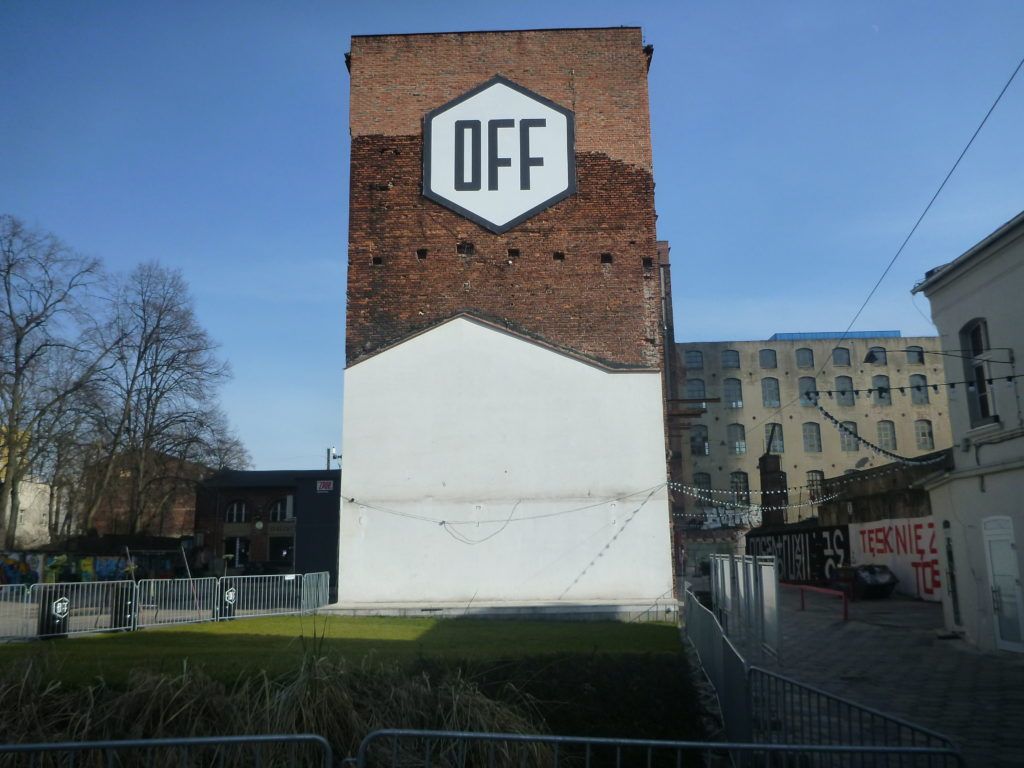 Łódź has lots of wall murals scattered across various parts of the city and if you follow this guide, you will encounter many of them on your walk down Piotrkowska Street. Of these, the huge mural located at number 152 is the most visited and the most distinctive. It was once listed in the Guinness book of records as the largest piece of graffiti in the world. The mural is known as “Łódź winning” and is a representation of the city’s history. It was made entirely using cans of spray paint (2000 of them) and was finished in 2001. 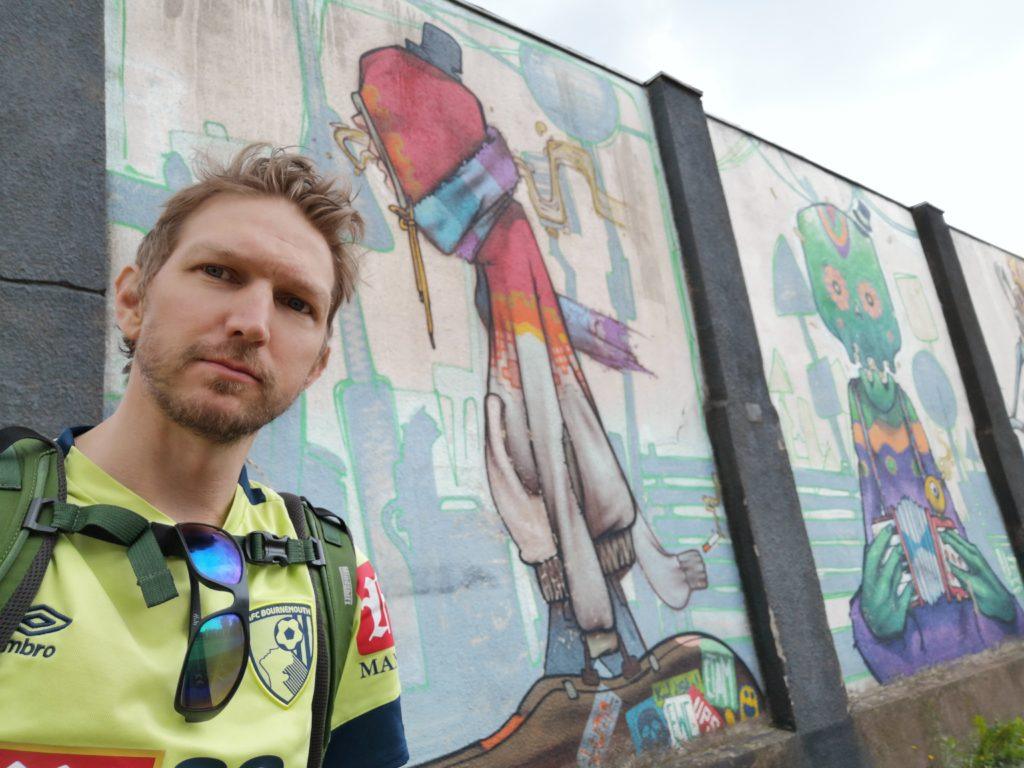 The Walk of Fame on Piotrkowska Street

Łódź has been labelled “HollyŁódź” over the years due to the fact that the city is the centre of excellence for Poland’s film industry. The city has a “Walk of Fame” with stars on the pavement, the same way that Hollywood has. This walk of fame is naturally also on Piotrkowska street and was designed by Andrzej Pągowski back in 1998. You can see the stars of these Polish movie celebrities and more: Roman Polański, Pola Negri, Jadwiga Andrzejewska, Kazimierz Karabasz, Janusz Majewski, Władysław Starewicz and Zbigniew Zapasiewicz. The National Polish Film School is also located in Łódź.

Łódź Bajkowa (Fairytale Łódź) is a project where monuments have been erected all over the city. Not all of these are in and around Piotrkowska Street, but keep your eyes peeled for Miś Uszatek (located at number 87). This is a fictional cartoon bear who is popular with Polish children. Half way down Piotrkowska you will also see the large statue of famous pianist Artur Rubinstein. It’s outside Piotrkowska number 78 – the address where Artur once lived. Finally, towards the end of your adventure down Piotrkowska Street you will come to number 282, where the monument Trzy Misie (Three Bears) sit – again this is a statue of cartoon characters.

Finally, once you have reached the end of Piotrkowska Street, at number 294, there will be a famous tram station, from where you can get a tram to most suburbs in Łódź and conclude your tour.