So it’s now time for my September 2017 vote which will dictate what I do or where I go in October 2017. I run this Poland Poll every month. So far it has led to me going Speed Dating, backpacking in Biskupiec, sky diving indoors, getting naked on a beach and doing a holy pilgrimage to Częstochowa. This month my challenge was voted that I should leave Poland for a NEW country, so that is to come. These are the four options, plus you can suggest an other this month for the first time – sensible please!

1.Attend 10 Football Matches in October 2017
2.Visit my final two Polish Provinces in October 2017
3.Visit the Skull Chapel in Czermna
4.Visit Wolf’s Lair, Adolf Hitler’s military headquarters in World War II.
5.Other
For what I do next month, get voting please. Voting ends on 30th September midnight Polish time:
September 2017 Poll: What Should Jonny Do in October 2017? 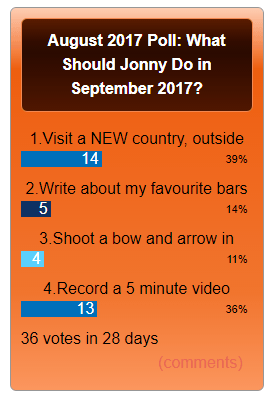