“It’s written in the starlight and every line on your palm. We’re fools to wage war on our brothers in arms” – Mark Knopfler. 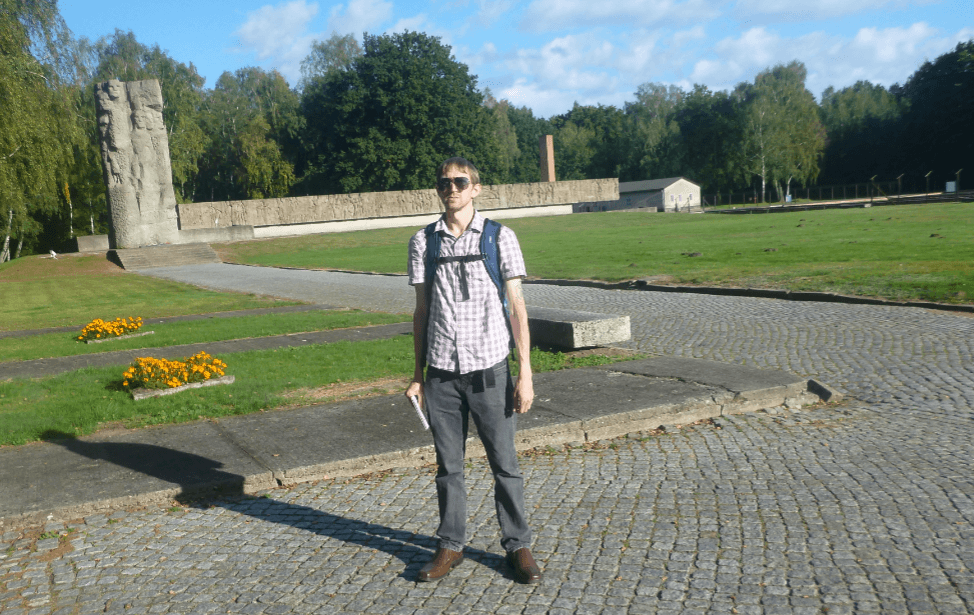 As a Northern Irishman living in Poland, it is essential to read up on the history of my new home and to understand the horrors of the past. Poland, sadly has been through it all – disappearing from the map at one point, before later being attacked by Germans and Russians, then surviving communism. Poles have had it tough, so in this series called Nigdy Więcej Wojny (No More War), I write about the past disasters and look forward to peace. In 2015, I toured Auschwitz and Birkenau. In 2016, I toured the horrific German concentration camp at Stuthof in northern Poland. 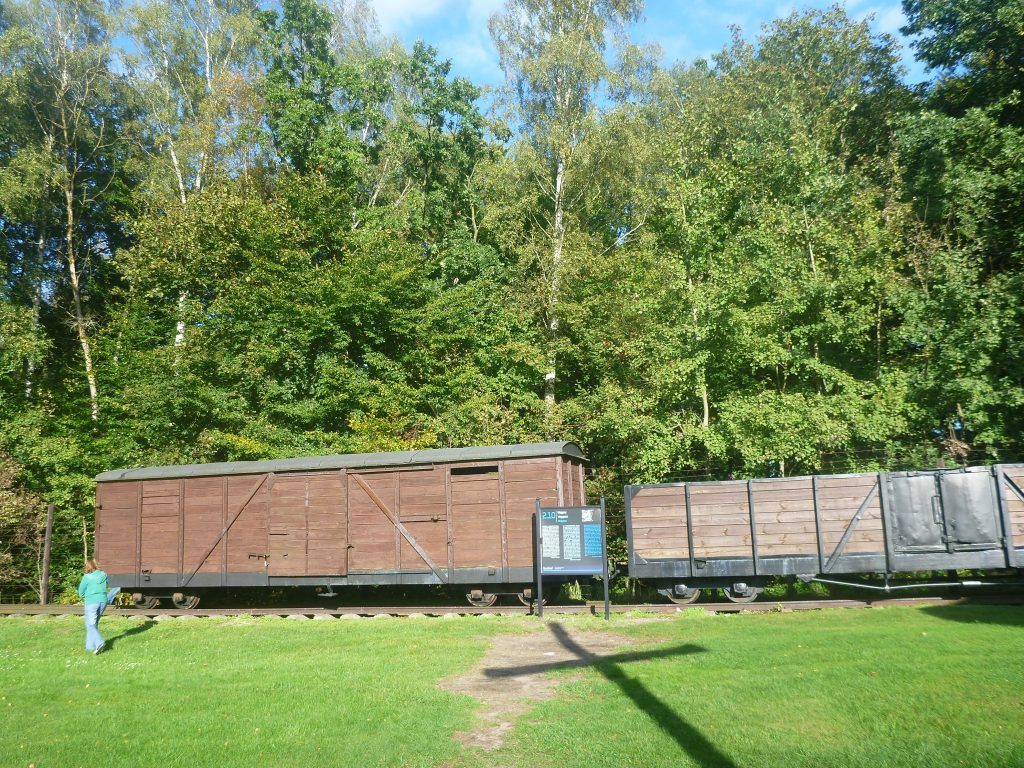 The bottom line here is that Germans tortured and killed thousands of innocent Polish (and other nationalities) people here over a 6 year period from 1939 – 1945. This much is fact. With so much deceit, lying, hate and inhumanity in the world, I feel the need to go to these places to provide me with a peace and calm. Growing up in Northern Ireland impacted on my travels in a big way. With so much death and injustice, I just wish the people I meet on my journey are those of peace, justice and pure honesty. It’s a low ask. 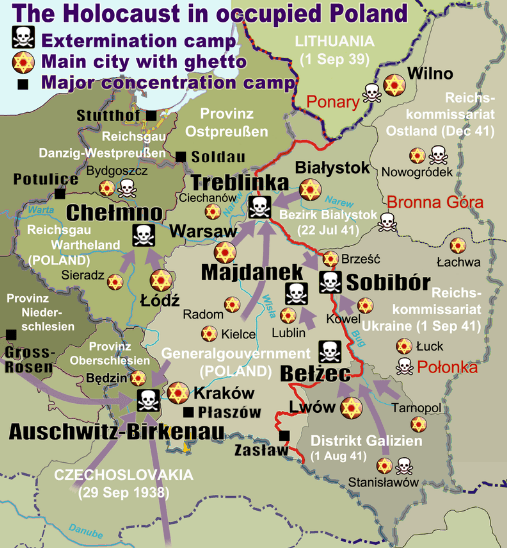 I’m not scared of war, death or suicide. I grew up in Northern Ireland. I embrace peace with open arms but my journey has been furnished with gory and macabre missions for me, not just in Poland I have to say. Outside Poland, I backpacked through all this with a dark mind, down the years of my travels: 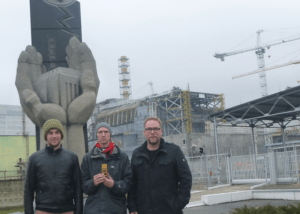 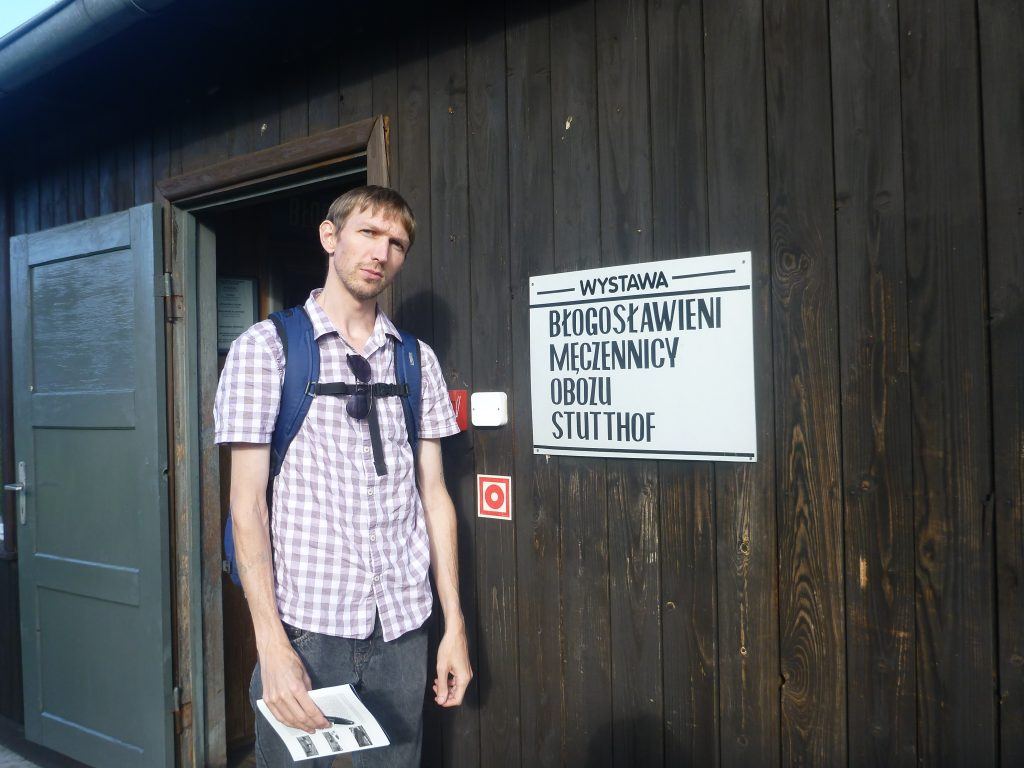 “If this is peace, then what are we to class as war?” – Northern Irish lady in the aftermath of the Omagh bombing, 1998.

Getting to Stutthof, Poland
In order to get to Stutthof, you need to be heading for a Polish town known as Sztutowo. Though, because these were all German built concentration camps then I use the German name of Stutthof, as I did with Auschwitz and Birkenau (rather than the Polish name Osciewiem). Let’s not dress up their German Nazi bullshit as anything other than pure vile hatred and extermination of races of humans. Remember these are #Germandeathcamps #Germancamps they’re not Polish. 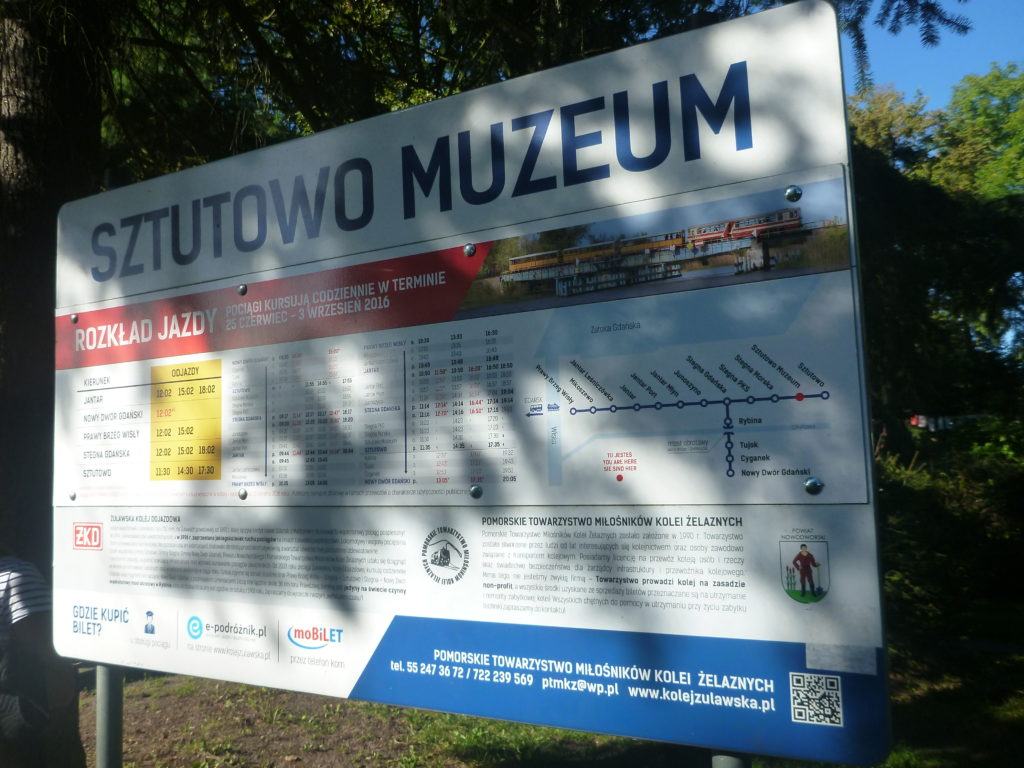 You can book a tour from Gdańsk to Stutthof and this probably remains the most popular option. Alternatives include tours from Warszawa or nearby Elbląg. However, I was travelling to Stutthof while based at the Hotel Parkowy in Malbork, so we decided to get a train from Malbork to Elbląg and then a bus from Elbląg to Stutthof. I was with two Polish travel friends. 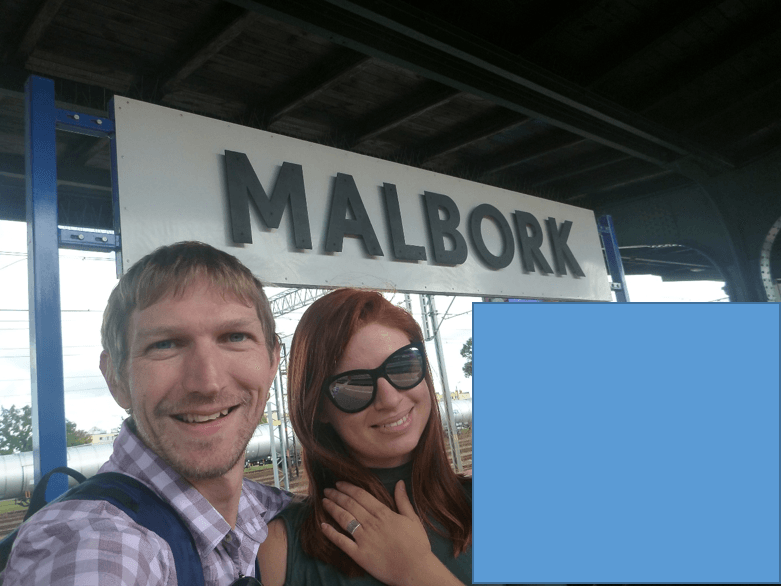 On route to Stutthof

Here was our route:

Train from Malbork to Elbląg
Malbork has quite a good main train station, it’s also rather pretty. Polish trains are amongst the best in Europe. Ticket prices from Malbork to Elbląg are well priced from 12 – 20 zlotys normally and the journey can be as fast as 20 minutes, or on a slow train can stop everywhere and take an hour. 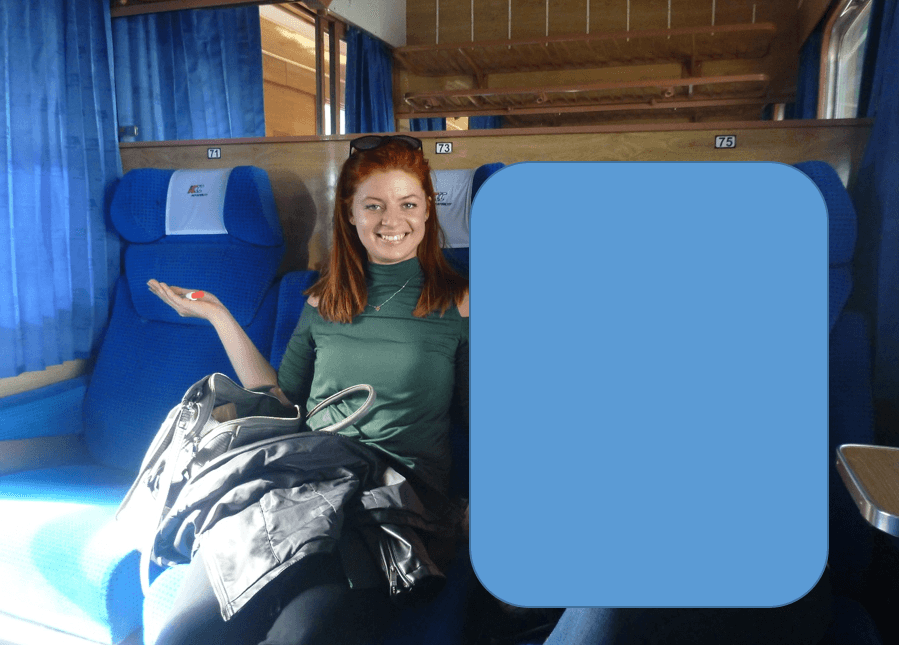 On the Malbork to Elblag train 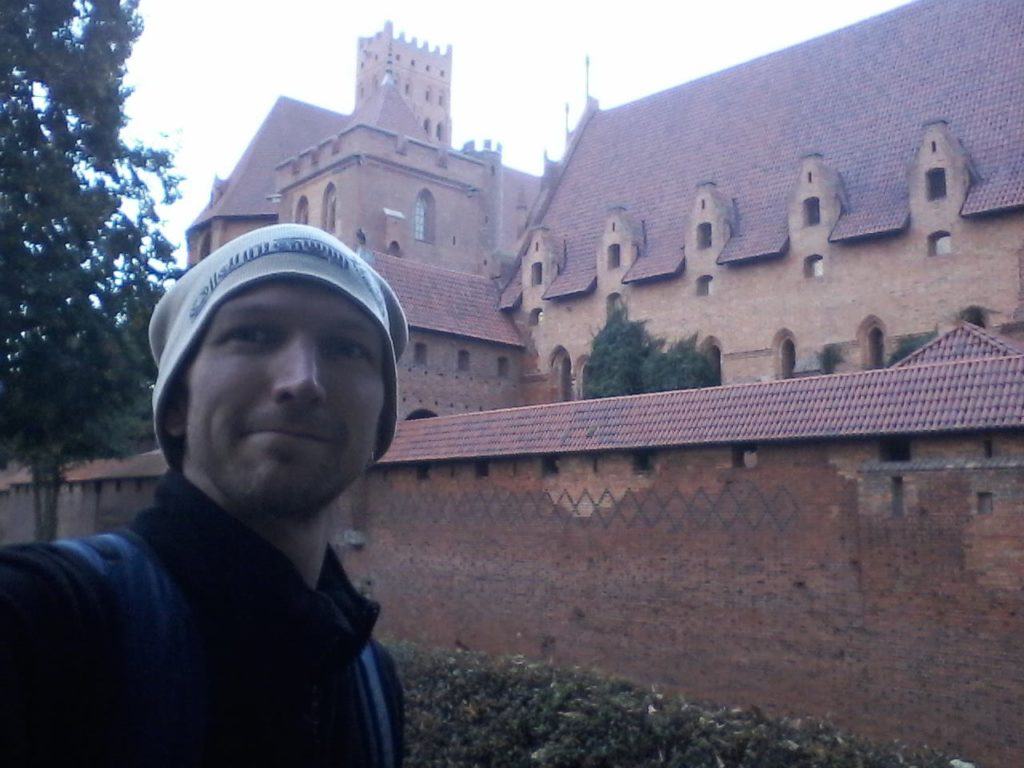 Bus from Elbląg to Stutthof
From the main bus station in Elbląg we got the number 371 bus to Stutthof. The bus cost 12 zloty each and it took around an hour. The bus is cosy and you buy the tickets from the driver. We also had some time to see around Elbląg on this trip. 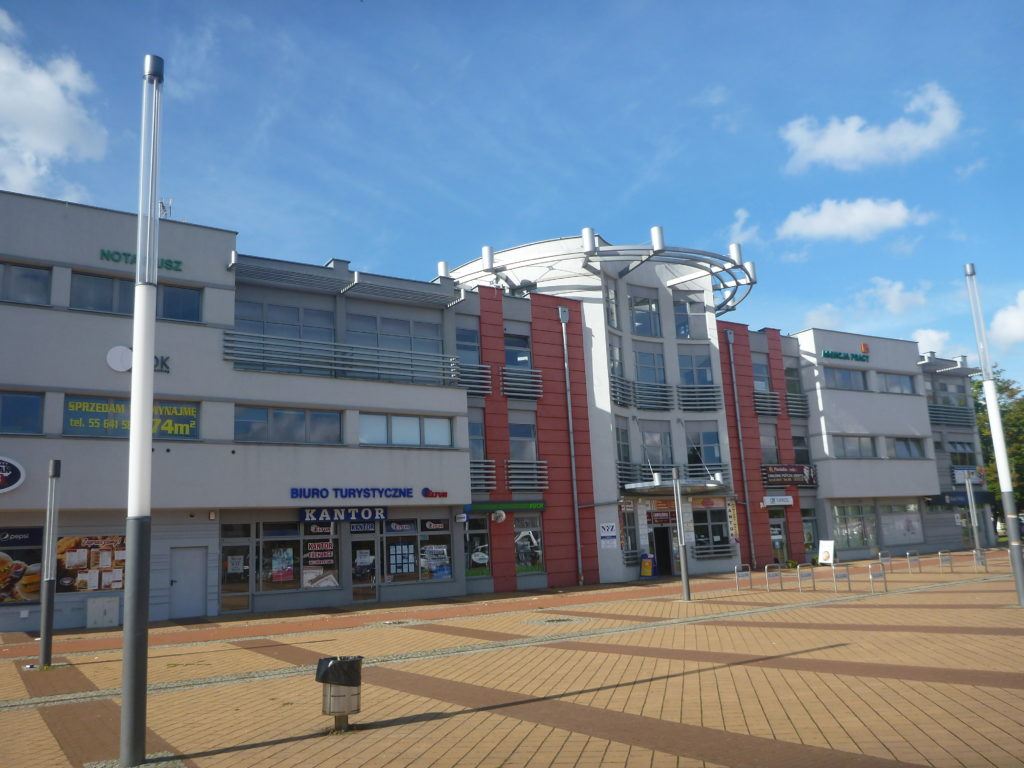 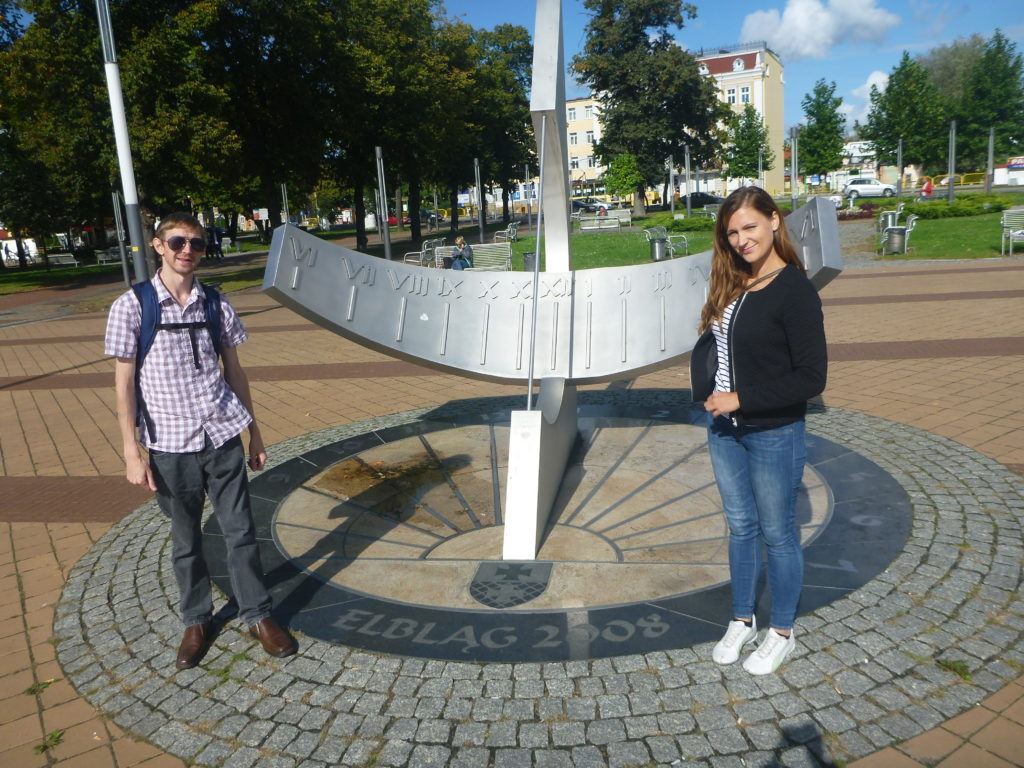 We went back the same way. I stayed in the Hotel Parkowy in Malbork, but there are of course hotels in Elblag and Stutthof (town of Sztutowo). Stutthof can be done on a day trip, or even a half day trip. As a bonus, we got to see some of Elblag too – a really nice town. We actually had to change buses on this trip, but this is unusual. It is normally direct – the bus had some problem. 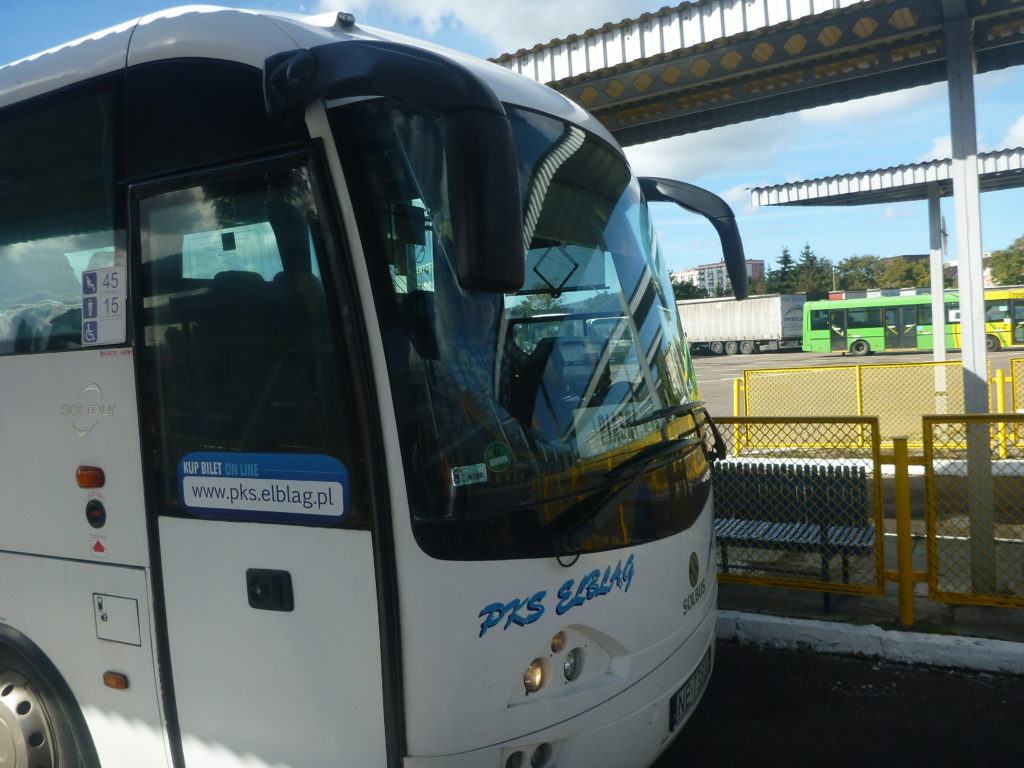 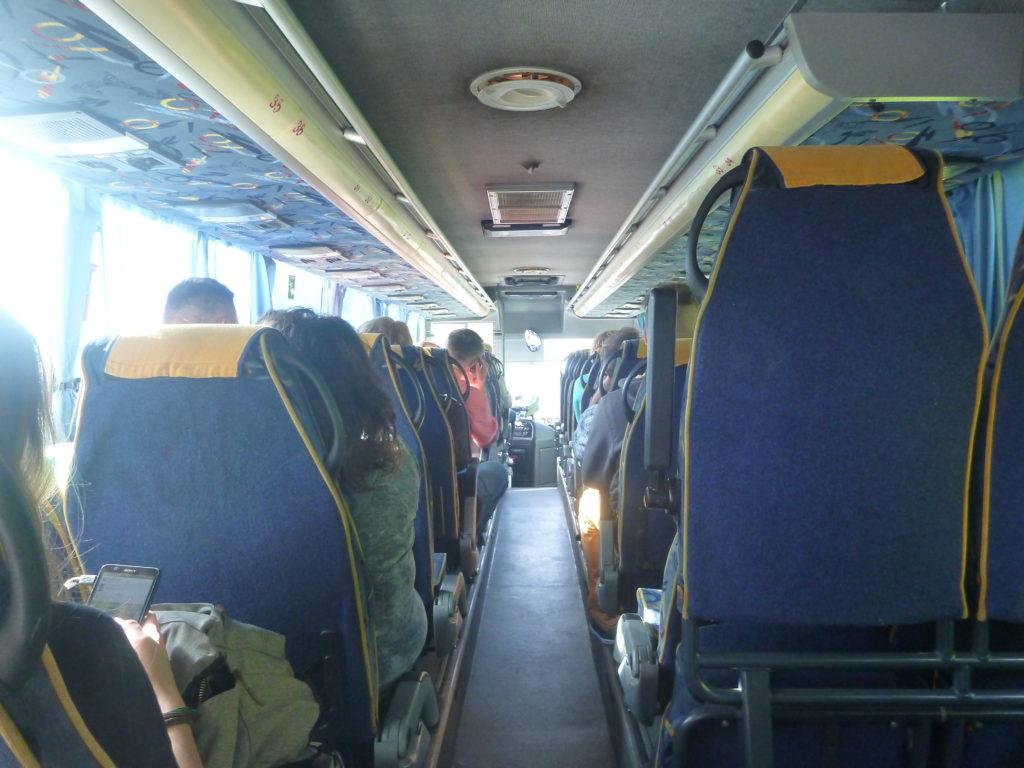 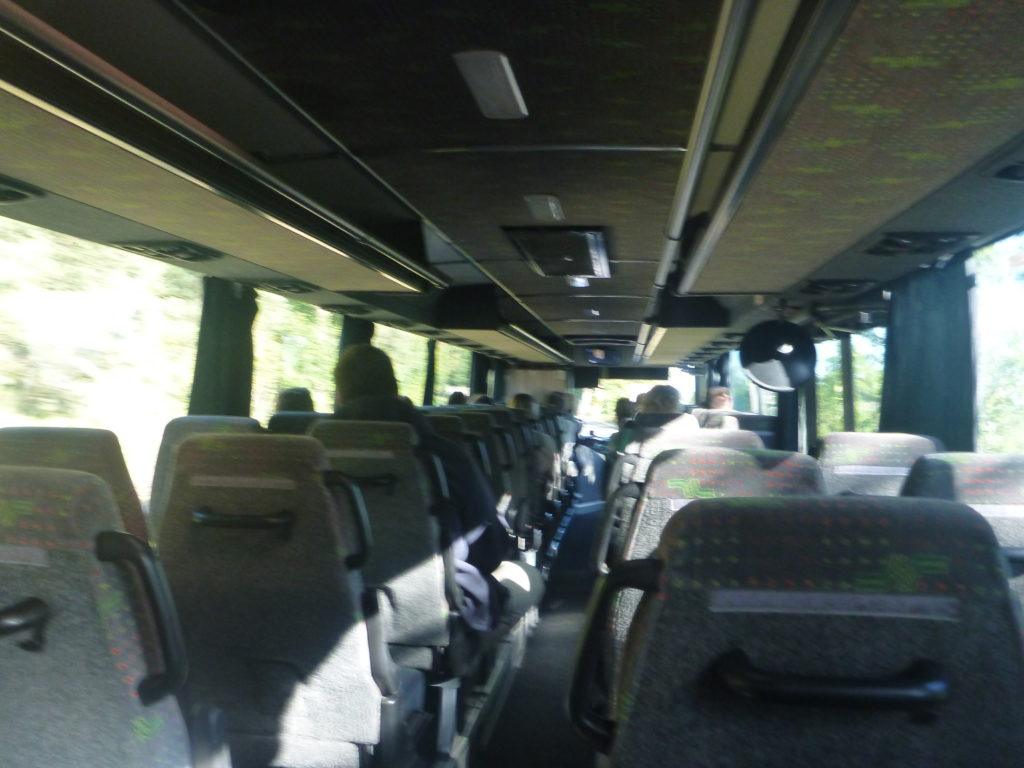 The Importance of Stutthof: The First and Last
While most “tourists” visit Auschwitz or Majdanek in Poland and Dachau in Germany, Stutthof is not one of the most commonly visited concentration camps, however it has a high importance. First and last. 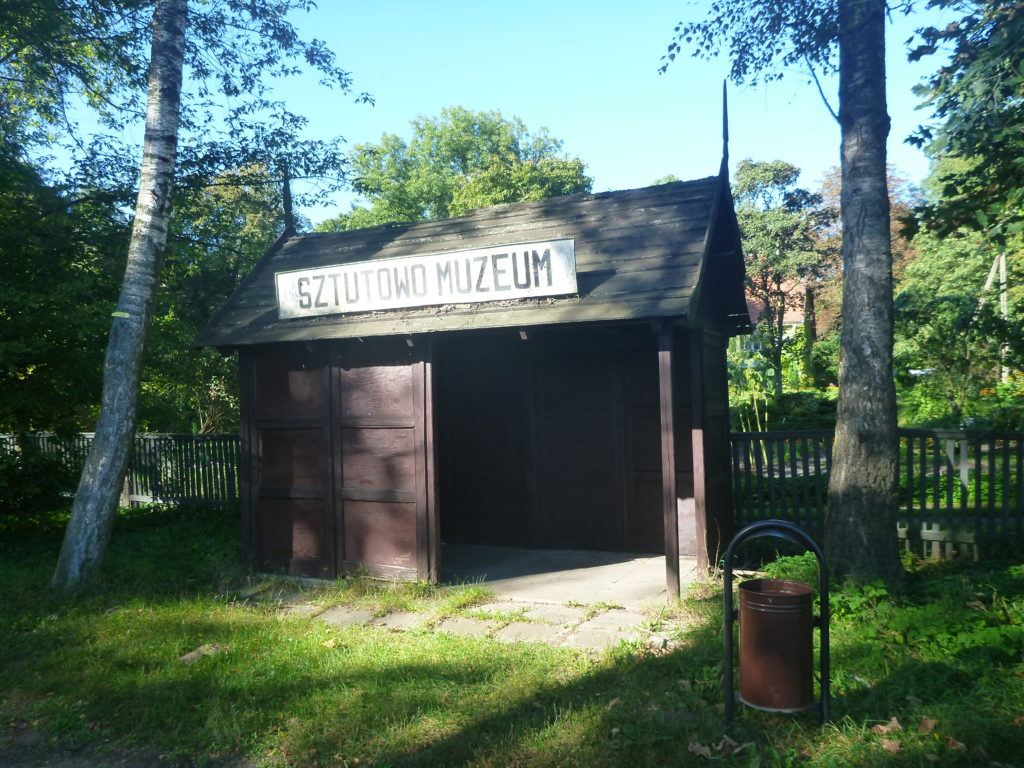 The Importance of Stutthof: The First and Last

Stutthof was the first camp outside German borders, it was in operation from September 2, 1939 – the Second World War began the day before in Tczew, Westerplatte and Gdansk. Stutthof was also the last camp liberated by the Allies on May 9, 1945 – the Russians and Belarussians liberated it. More than 85,000 victims died here at Stutthof out of as many as 110,000 inmates deported although some were exterminated on arrival without record so numbers are probably higher than that.

Touring Stutthof
When you arrive, the route is obvious, from the main road you head past the large sign on the corner (before the village of Sztutowo).

Entrance to Stutthof
As visiting here is highly important, entrance is free. Donations for the upkeep are of course encouraged and personally, I bought a mini Guidebook in English which cost just 4 zloty (£1). It goes some way to paying for the upkeeping of a highly important yet horrific site.

Once inside, I had my guide book and we followed the obvious path through the parts of the complex. You can pay extra for a guided tour of course, as I had done on my trip to Auschwitz before, but here we chose to walk it alone and read the book.

The first inmates imprisoned at Stutthof on 2 September 1939 were 150 Polish citizens, they were arrested on the streets of Gdansk (then the free city of Danzig) right after the outbreak of war. The first part of the tour we had already seen the Railway Station (now used in summer for the scenic railway line called the Zulawska Kolej.  We walked past the commanders villa and the doghouse and it is in the SS Guardhouse at the main gate where you can buy some books, postcards and guides. Then there is a huge courtyard withe main command building behind it. This houses a mini museum now of belongings from the victims. 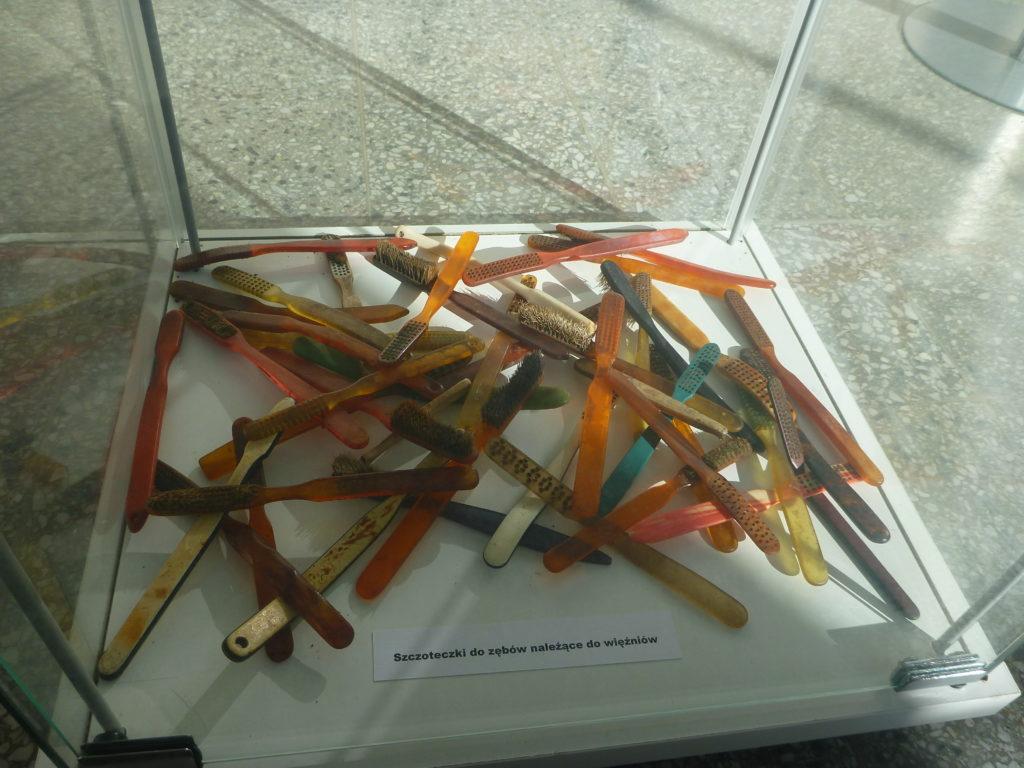 Belongings from the victims

A photo shows what the Command House looked like under German rule. I find the sight of the German Nazi flag very disturbing these days. 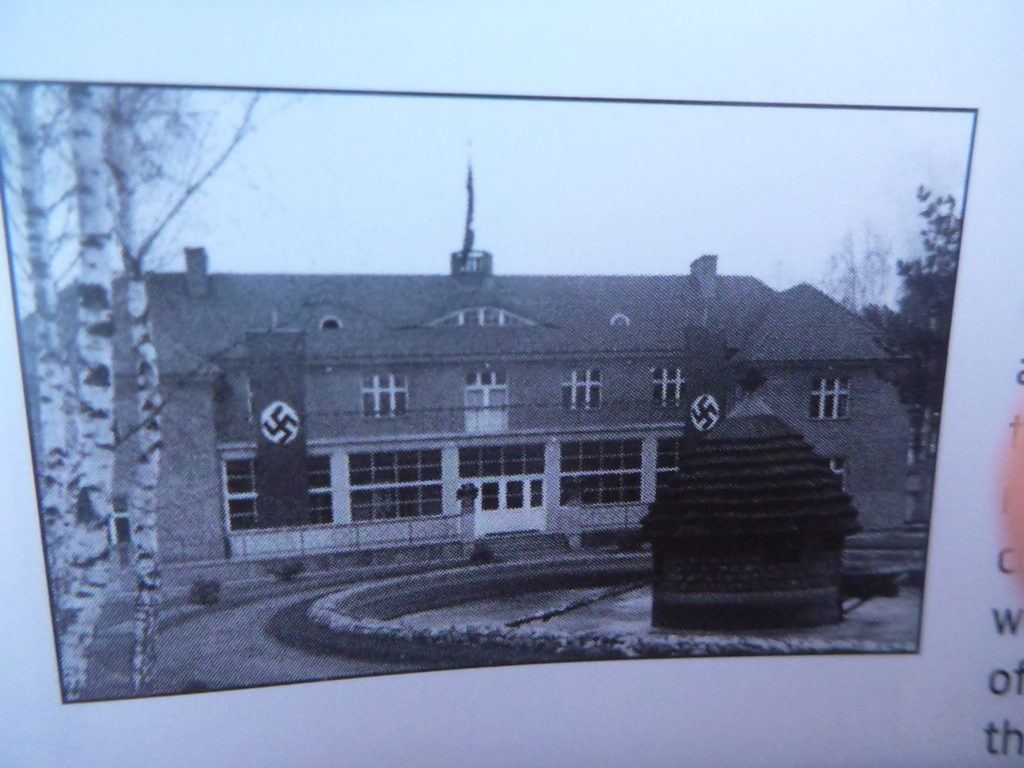 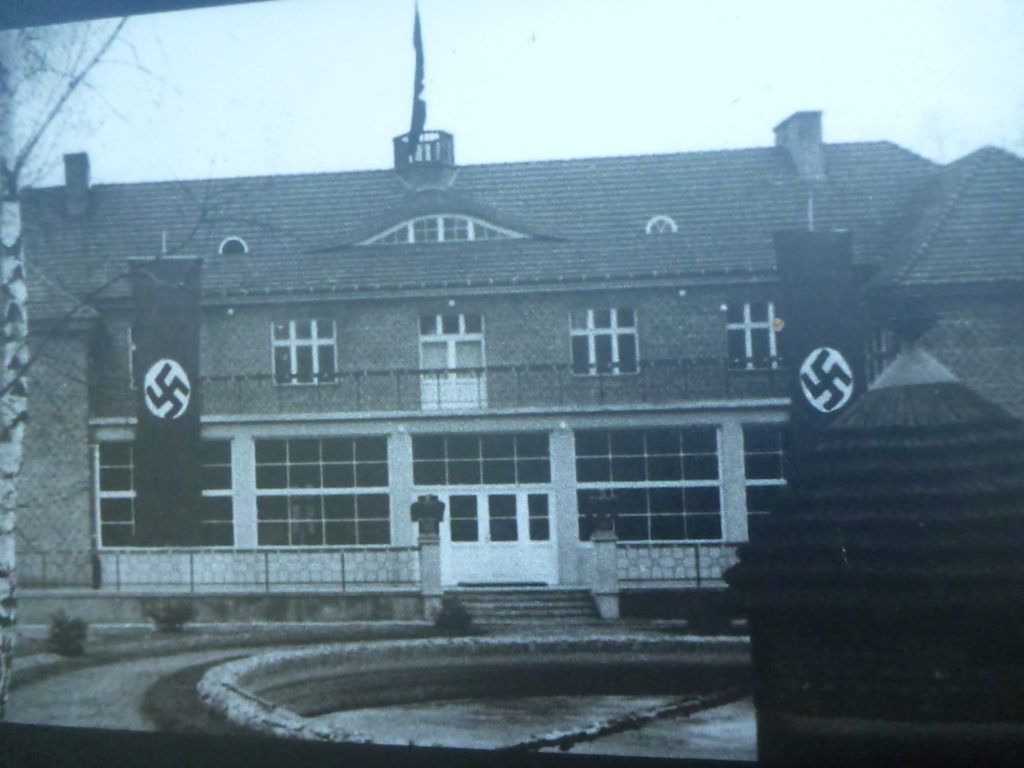 The inmate population rose to 6,000 in the first two weeks, by 15 September 1939. During the next 5 years, tens of thousands of innocent people, perhaps as many as 100,000, were deported to the Stutthof camp including non-Jewish Poles and both communists and Jews from all of Europe. These totals are thought to be conservative, as it is believed that inmates sent for immediate execution were not registered. The next stop is the building known as Camp Canteen. I find entire places like this full of ridiculous euphemisims, considering the fact that most of the inmates were on rations, starved and worked till death. 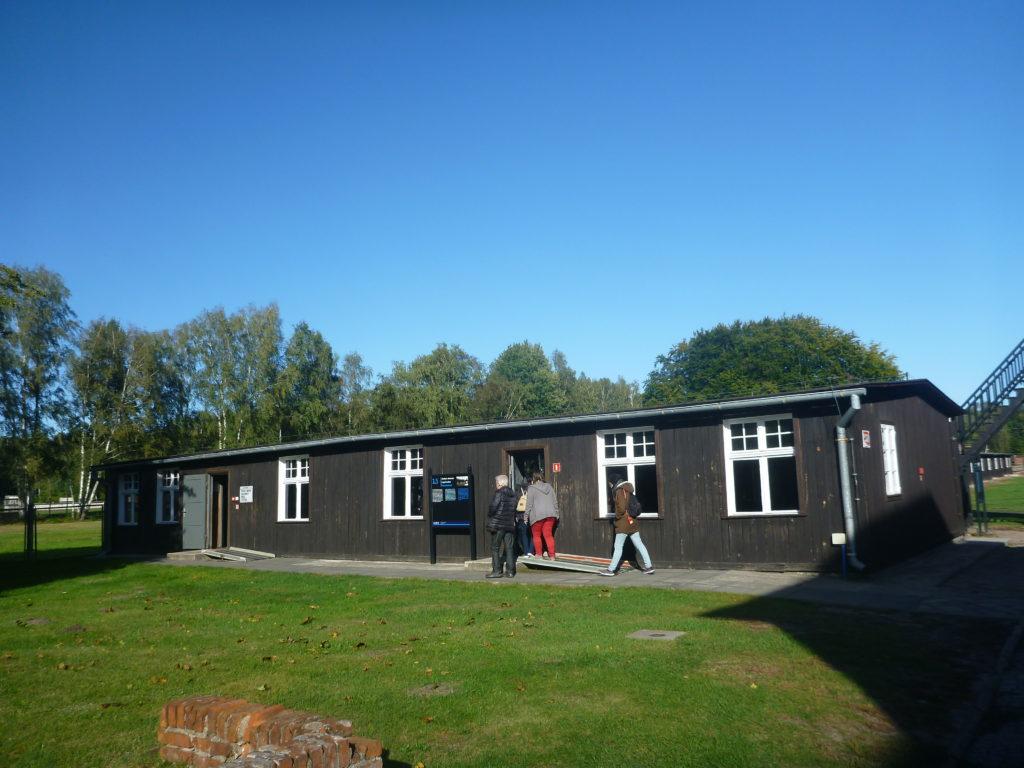 Inside the “camp canteen” is a huge museum tribute to members of the Polish clergy. One thing that inspires me so much in Poland is how strong a part the church plays in the culture here. Undoubtedly this is one of the reasons why I want to live here. Shoes of the victims takes up a huge cabinet too. It’s nothing short of grotesque and sickening. 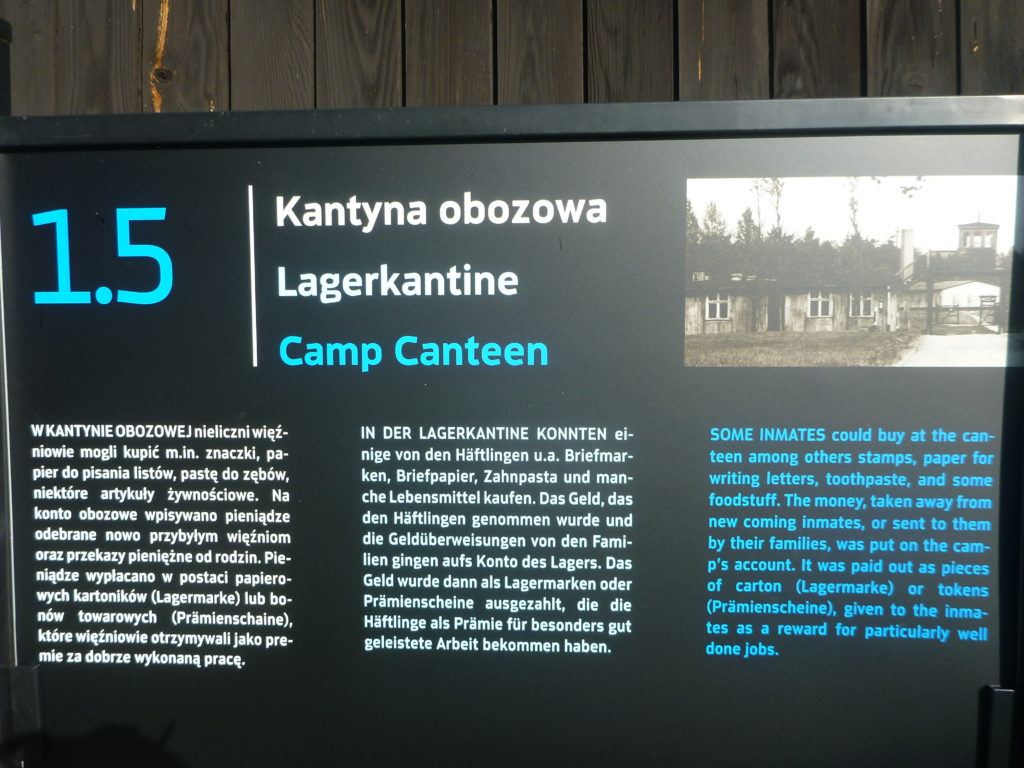 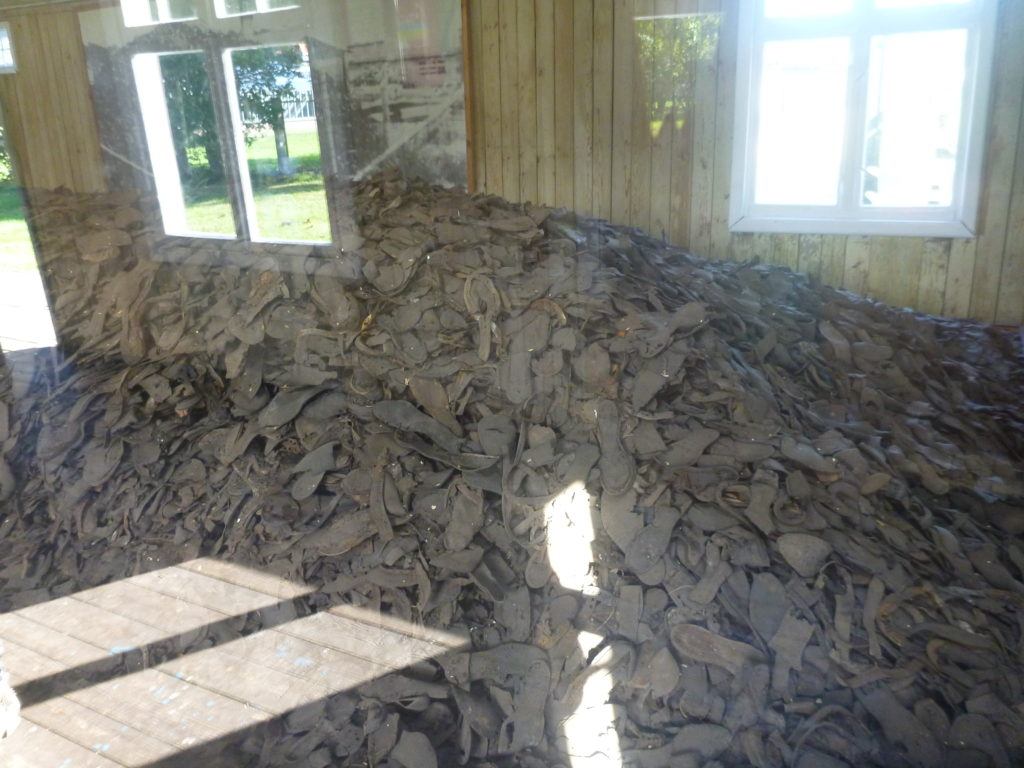 Shoes of victims in Camp Canteen

Just two months after my visit to the holy town of Pelplin in my depression period, here we see some information on Pelplin Abbey and a photo of it. 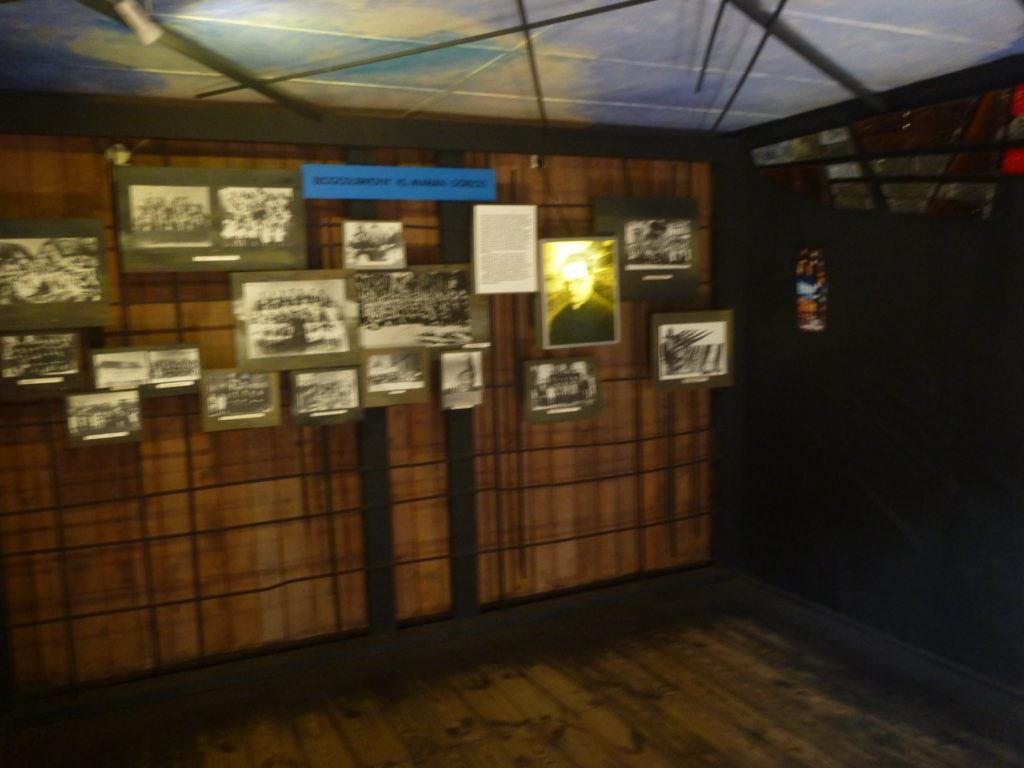 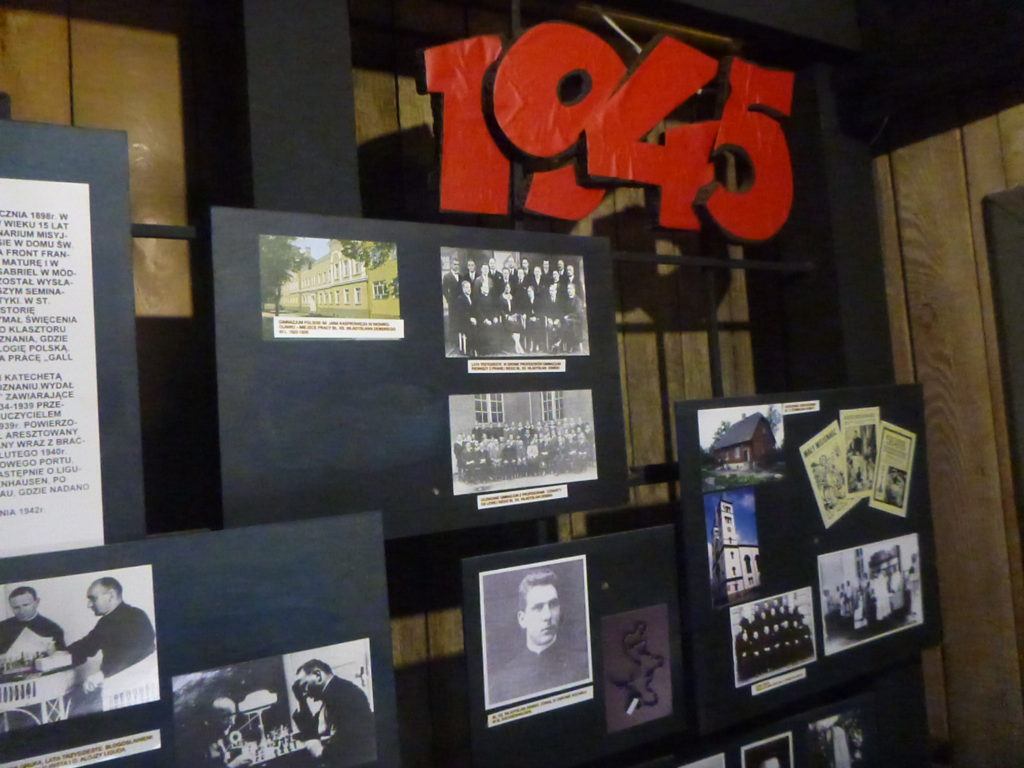 After the canteen, we pass through the “Death Gate”. With barb wire, black wood and a vicious looking “control box” this has all the makings of asshole German Nazi power. This time, no euphemisms.

Past the death gate are the blocks of the women where they were kept on arrival in a quarantine period to learn the “rules of the camp”. As expected there is a lot of information on the walls, lots to read and take in.

Beyond this on the right hand side are morgues and mass graves.

Wagons that brought the innocent victims here can be seen at the rear of two buildings which are so distinctive, you don’t need to be told what they are.

One of them is a gas chamber, the other a crematory. I don’t need to say much more.

The Jewish Star of David sits beyond this and through the other side is a huge memorial. 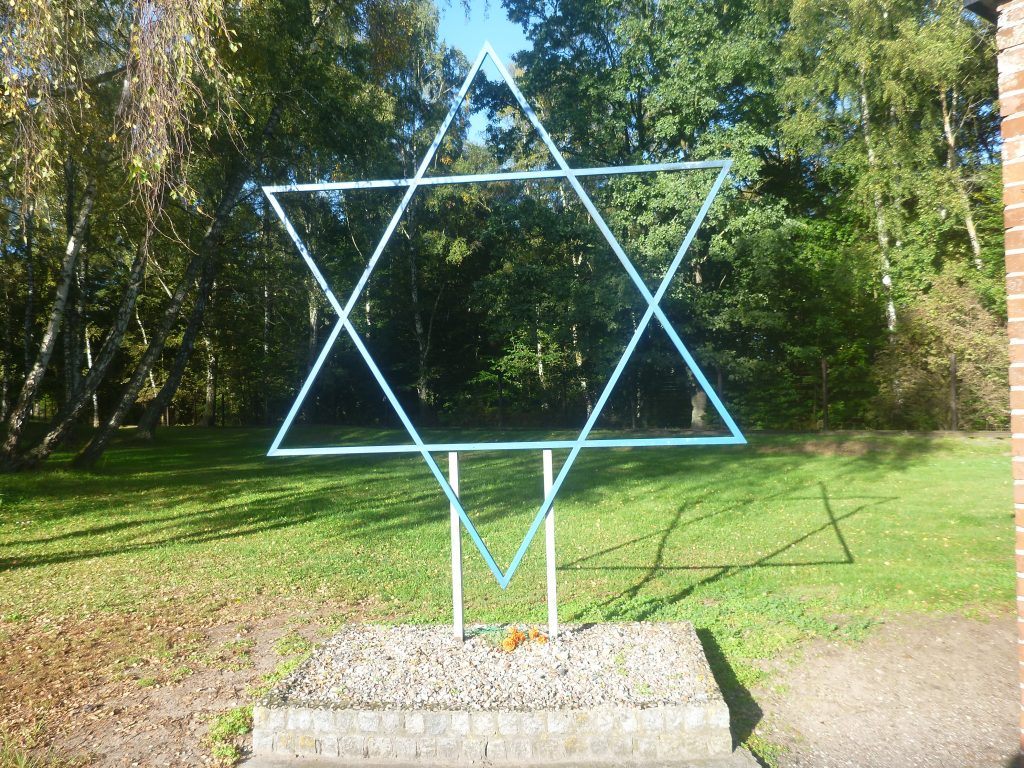 The Jewish Star of St. David

As I write more and more on concentration camps, I always realise, there is nothing more to say. The photos and the memory is chilling enough. People were worked and worked and eventually they were too thin to work any more and they died. A lot of those who survived Stutthof, died at sea. The entire place and history behind it is horrific. This really happened and more German people need to visit it to see it. Stutthof was not a “death camp” but a concentration camp, but it was all part of Hitler’s “Final Solution”. 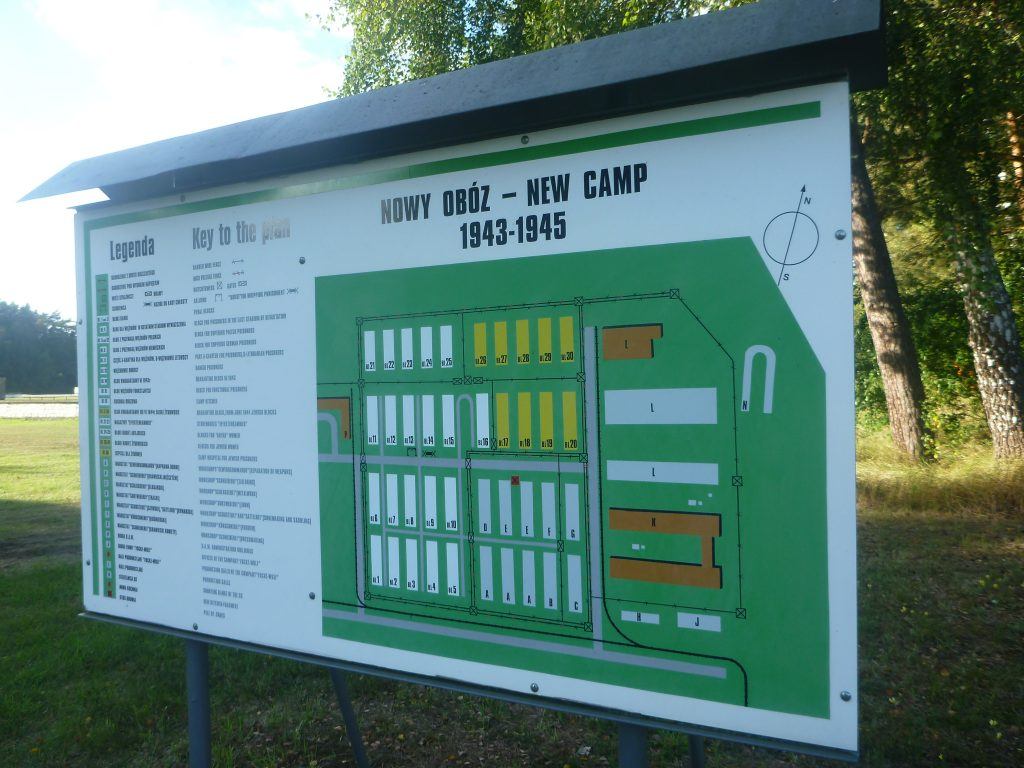 Plan of the New Camp at Stutthof

As well as what I have already mentioned, Gallows are present, as is a “garden” where vegetables were grown and in behind it the remains of more camps for the inmates.

You’ll need about 2 hours to see everything here at Stutthof, and it’s important to remember how sensitive a subject this is. Remember, German people did this to their neighbours, and it was only 70 – 80 years ago. There was a temporary exhibition on when we were there with paintings, some done by the inmates.

Rest in peace my fellow humans, I’m truly saddened by it.

Here are some videos of my trip to Stuthof German Concentration Camp in Poland: